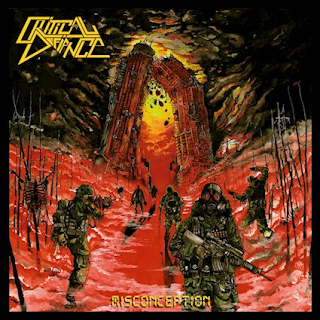 Critical Defiance--Misconception  cd {Unspeakable Axe Rec.}
Chilean  thrashers Critical Defiance have inked a deal with Unspeakable Axe to release their debut full-length Misconception is eight tracks of intense and aggressive thrashing mayhem.The guitars are played with lightning fast aggressive patterns and chords.The guitarist does write some mid paced guitars and also adds some very well played and written solo's.The vocals are thrashy screams and some deeper gruff screams that really fit Critical Defiance's musical style.The drums are played with crazed yet very well crafted drum patterns that are both vicious and memorable.If you are a fan of well played and performed thrash metal that pays respect to both the 80's thrash gods while adding their own creativity then be sure to pick up a copy of Misconception when it is released.