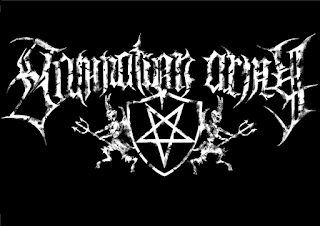 1.Hello Thomas how is 2019 starting out for you my friend? Please introduce yourself to the readers?

Hello Patrick. Things have started out quite good this beginning of the year. Lots of things going on music wise, many projects are in the works and are about to launch. Who am I? I guy from Sweden who has been involved in the realm of metal since 1996. Was very much into tape trading with people from all over the world and started both my own music projects as well as a short lived label in 2004. I launched this year a new label that will mostly focus on my own projects called Ironmaster Productions. I have a Facebook side for those interested in checking that out.

2.When did you first become interested in writing and performing music? What was the first instrument you learned to play?

I started playing guitar at the age of 10 and realized soon after that I could play the most instruments around me. That kind of tickled my interest to pursue starting to write my own material. About the age of 13 I got into metal and then pretty much went through all the history and all genres. It was a great time for discovering a whole new world.

3.Are you self taught or did you take lessons when first starting out? Are their any instruments that you have not learned to play that you would like to one day?

I am self taught. I found that to be easier + I like to figure out things for myself in general. There are many instruments I have yet to try. Would love to explore more on that front and perhaps will a day.

4.Thomas you started Damnation Army back in 2002 what gave you the idea to start this band? Who would you say are the bands biggest influences and have they remained the same over the years?
I really don’t remember to be honest. I just wanted to do something and started to experiment. My two first demos were recorded on extremely poor equipment. Like using tiny headphones for microphones etc. I was lucky to get any sound at all captured. My biggest influences was Scandinavian black metal and some other stuff and those bands I listened to then are still the stuff I consider the best today. I don’t listen much to current things as it doesn’t bring me the sensation of the things I grew up with. I don’t really follow what is going on today but I try to keep up with it a little bit at least.

5.Death Macabre is the brand new release how long did it take you to write the music for this release? How long does it usually take to complete one song?

I was pretty much done with Damnation Army after the release ”Circle of the Brave” (2009, Mascot Records) and didn’t think I would do anything new with this project again. That is why it passed 10 whole years. Then I just suddenly got the idea to do a new album. I wrote, recorded and produced Death Macabre in 4 days so I did 2 songs per day. 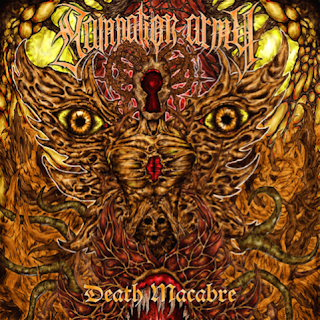 6.Where do you usually draw inspiration for the lyrics and what are some topics you wrote about on the new release?

I don’t really drawn inspiration lyric wise from anywhere. It just come to me totally naturally. I have never been interested in discussing lyrics as, like the music, it is for the interpretation of others to draw their own conclusions about it.

7. Death Macabre is only a digital release are their any plans to do a physical release soon or would you like to find a label to work with?

The reason why I did, to begin with, a digital release only was to go totally independent. I don’t wait anymore for a label to get a deal with to later decide for me when it will be released. I am open to label  contacting me for a release but I decide when I write and publish material. It will most likely get a physical release in time.


You can fairly easily find "The Art Of The Occult" on eBay and ”Tyrant" and "Circle Of The Brave" on several sites like Amazon etc. I do not have any merchandise myself to sell. The best support you can do at the moment is to pick up the release on bandcamp for now.

9.I know you have always worked alone with Damnation Army but I was curious have you ever thought of adding more members to have a full line up?

10.What do you feel is the easiest and hardest part about being the sole member of the band?


The easiest part is that I don’t have to wait on anyone to start recording. After it can be tedious sometimes to have to play everything yourself. I wouldn’t say it is a hard part just energy consuming after a while.

11.I believe you have some other projects and bands you work with are these currently still active or are you soley concentrating on Damnation Army these days?
Yes that is true. My main other projects are Isgärde and Vetraheimr. Isgärde is a pagan black metal band and Vetraheimr is a Dungeon Synth project. Both have bandcamp pages and Facebook pages for those interested. I have been very active with both of these other projects.

12.You have been a part of the underground scene since the late 90's what is it that has kept your attention over the years?

To be brutally honest I had a good amount of years I kind of lost interest, or perhaps focus, on music and metal. I got distracted with others things and didn’t feel I had the time to be active with music. I kind of skipped listening to metal during this time, probably for about 5 years or so. Then when lot of things got solved in my personal life I got back on the horse and feel as enthusiastic as when I started out again. I am not myself if I can’t, don’t feel to produce music.

13.Besides metal music do you currently listen to any other underground forms of music? If yes who are some of your favorite bands and artists?

I can not pin point any particular bands as I listen very fragmental on stuff these days. I like many different styles and genres from different time periods so that can change anytime.

14.When you need to take a break from working on new music or band business what do you enjoy doing in your free time?

I am very much a thinker so I like to spend a lot of time to ponder on things.
Philosophy. Other than that I like strength training, watch and learn things about cinema. Occasionally read a book. Study things I get interested in.

15.Do you get the chance to go to very many concerts in your town or do you prefer staying in? What have been some of the most memorable shows you have
had the chance to see? Who are some of your favorite bands to witness live?

Tricky question. I don’t like live concerts. I am more into listening to records and enjoy it by myself. I did try out go to some shows in the past but even the bands that I liked very much I wasn’t to keen on seeing live once I did it.

16.Thank you Thomas for taking the time to fill this interview out do you have any final comments for the readers?

Check out Damnation Army, Isgärde and Vetraheimr if you are interested. Easily found on bandcamp, youtube, streaming services etc. Also I want to put a word in for my friend Tim Nordstedt who has done the cover art for Death Macabre. You can find him on Facebook if you search Tim Nordstedt Design. Thanks a lot for the interview Patrick.