Interview with Simon vocalist, guitarist for Valkyrja done by Patrick

1.Hails Simon how is life in Sweden this week? Please introduce yourself to the readers?

At this time we have just finished the first tour for Throne Ablaze. Returning as a live act and performing with the new line up was indeed a long-awaited relief. We are currently planning more dates and are eager to march forward with fierce energy.

2.When did you first discover black metal and who were the first bands you listened to? Who are some of the current bands that have caught your attention?

In my early youth I found interest in the Scandinavian scene with the most obvious bands such as Darkthrone, Mayhem, Marduk etc. As internet was not as spread or polluted as today it was rather local record stores that served with their selection. Currently I do not have much energy left for new impressions and thus can´t give you any example of a worthy candidate.

3. Valkyrja was started in 2004 so what gave you all the idea to start this band? And how did you choose Valkyrja as the name of the band does it have a special meaning?

I was working on various constellations with a friend of mine, and none really worked out. As we lived rather isolated, in a small countryside town called Stenhamra we didn´t really have much contacts. In 2004 we merged with another group of individuals with mutual interests. Valkyrja was created shortly after and we started off in a pretty high tempo. The name was chosen by our previous vocalist for its often forgotten meaning “carriers/bringers of death”, purposely ignoring the reference to the Norse mythology. Today the name has no other meaning than serving as a moniker for our creations 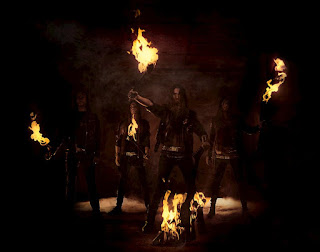 4.Who would you say are the bands biggest influences and how do you feel the bands’ music has changed over the years?

At the time when we started, I was indeed affected by my interest for black metal and its rebellious sphere. The music had a core that was not easily defined or understood which created a sudden interest to work with the forbidden and unknown. However, my background as a musician has its roots in the 70s 80s, with bands like Kiss, Venom, Iron Maiden, Saxon, Judas Priest. I have come to notice that my borders have been fading and I have come to work with the dynamics and expressions found in my earlier background. This in my opinion diversifies Valkyrja from bands that we are often compared to.

5.Throne Ablaze is the bands fourth release how long did it take the band to write the music for the new release? Does the whole band take part in the writing process or does one member usually write everything?

Material has been collected ever since the previous release “The Antagonist’s Fire”. However, the songs were not starting to take form until the end of 2017, meaning it was an intense period of 5-6 moths to put all the pieces together. I work best in solitude; hence I write most material alone. I need to present my vision as a whole and can´t stand to work in a rehearsal room with one riff at the time. A composition consists of elements, which can not be understood without impact of the others. That would be like looking at a painting and remove every color except for example red, and evaluate the color on its own. My vision works as a template and is not written in stone until the actual recording, leaving it open for alterations.

6.Who is usually writing the lyrics for the music and what are some of the subjects written about on the new release?

Prior to this album all lyrics have been basically written by our former vocalist A.L. RSDX who replaced him contributed with “Crowned Serpent” and the rest has been written by me, except “Transcendental Death” which was a collaboration between our bass player and me. When the story of Throne Ablaze began RSDX was still supposed to be the singer and it was not until the studio session started that his absence resulted in our ways to part.

The lyrics consists of nihilism, negativism and existence. We have followed the path of A.L. but in our personal way. We question given structures of the world and the human mind rather than giving answers. We all suffer from our past and can never fully experience the present time. This makes one question the values of the structures that this world fed us with since our birth. I believe most people, including myself, experience limitations that reduce potential.

7.What have been some of the band’s most memorable shows over the years?

Maybe not the most memorable but certainly one with a taste of victory was a show that took place in Erlangen (Germany) in 2014, during our 10 years anniversary tour. Local antifascists managed to cancel the show in Nurnberg, twice. The second venue was threatened with violence the day before the show and not until the same evening a third one was confirmed. The show was moved to Erlangen, to a place that was more a night club than a venue. But it was packed, 150 showed up, and several others were denied entrance at the doors because of the low capacity. Quite a success I must say and a terrific job from the local promotor who despite the threats moved on!

Valkyrja is completely non-political band and we do not bow to frustrated cunts!

The tour is alongside Marduk and yet again organized by Massive Music. Apart from the tour we just finished in central Europe we will now march to its corners, starting off in Poland and moving in the east, followed by Spain and Portugal. Macedonia and a few others has remain untouched til now.

9.Besides the upcoming Throne Ablaze release are the bands previous releases still availible for the readers to purchase?If yes where can the readers buy it and does the band have any other merchandise currently availible?

10.What does black metal mean to you?

In respect to its origins I like to not put Valkyrja under such a label as I do not consider myself religious in a way that makes me fit in a group. However, if we look to black metal as a genre it represents to me the inner strife towards the unknown. It is a tool to comprehend a path away from life as we know it, free from worldly formations. There are no template or rules, rather bottom- and boundless.

Sweden has always had a strong music scene, not only when it comes to black metal. I think the isolated Scandinavian mentality breeds people who are focused and very serious with their art. I can not really comment it´s progress from the beginning to today, nor is it my interest.

12.Who are your all-time favorite Swedish black metal bands? Are their any new bands you feel the readers should check out soon?

You can never go wrong with acts such as Dissection, Bathory and Marduk whom over time have proved that their legacy remains. I do not really pay attention to today´s scene and have my interest elsewhere. Although I produced an album with the Swedish band Voodus a year ago, which will be released during the fall. That one definitely deserves more attention than any of the polluting cowl dressed mysterious bands.

13.Thank you Simon for taking the time to do this interview. Do you have any final comments for the readers?

I’d ask listeners to free themselves entirely from any expectations when listening to “Throne Ablaze”.