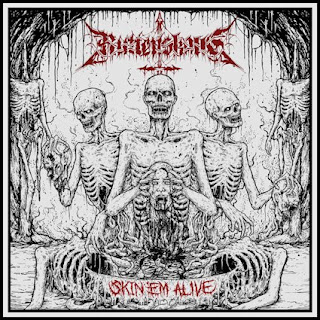 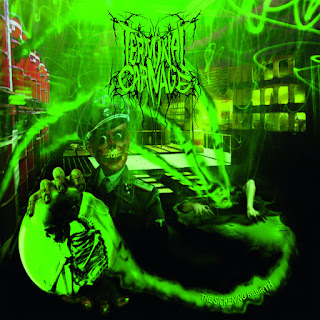 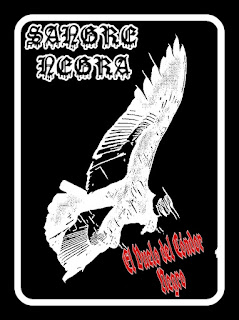 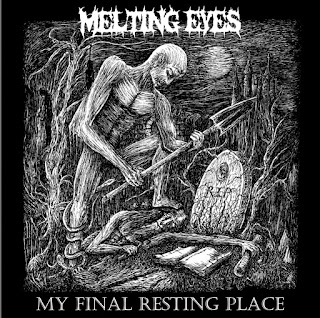 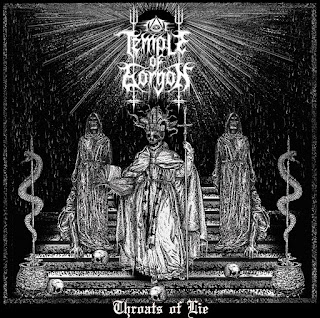 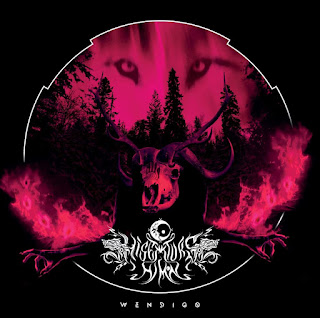 Posted by Winter Torment Web-zine at 11:31 AM 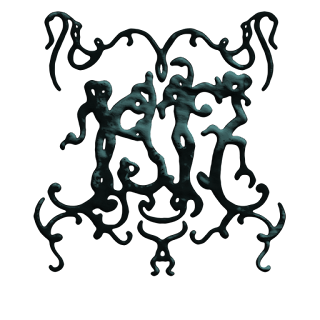 01. Hello Alejandro, please introduce yourself to the readers?

Hello Patrick and hello to all the readers! Well, I'm from Argentina. I'm the voice and guitar (and ocassionally also the bass) on projects such as 1917 (death metal), Funeris (funeral doom metal), Bokrug (grind & brutal death metal), Ammentia (thrash metal) and Dwimor (blackened pagan/folk metal), among others. I'm also a writer, mainly horror and sci-fi.

02. When did you first discover metal music and who were the first artists and bands you listened to? Who are some of the current bands and artists that you are listening to these days?

I discover Metal during late 80´s, when I was 12 years old. Some bands from my country (such as V8, Riff and Rata Blanca) did catch my attention back in the day, then I got some tapes of Loudness, Iron Maiden, Motorhead, Megadeth, King Diamond and a few others. While I was discovering all those gems a tape containing Death on a side and Carcass on the other side ended up on my hands. At that very moment I became a fan of extreme Metal. From those days I still love Death and King Diamond, yet because of their quality and feeling I often listen to many albums from those years.

03. When did you first become interested in writing and performing music? What was the first instrument you learned to play? Are there any instruments that you would like to learn to play one day?

I got my first guitar on 1992. I really wanted to play drums, but I ended up getting me a cheap guitar instead. Honestly I don´t remember why I did that. What I do remember is that later on, when me and some friends decided to start a band, we got a vocalist, a bass player and a drummer, so I kinda had no choice but to play the guitar. I still think I was going to be a better drummer than the guitar player I am nowadays!

04. Are you self taught or did you take lessons when first starting out?

I'm self taught. I was too lazy and at the same time too anxious to take lessons, so I tried to figure out the basics as soon as posible in order to write my own music. I never learned scales nor chords, all were about experiments and tips I caught here and there.

As many musicians did, me and a school mate started a garage band that went to nowhere. It was fun tho, but I soon wanted something more solid and serious. I wrote a few tunes that were a mixture of thrash, heavy and death metal (I did not know enough bands/albums to know better) and wanted to start a band to play that stuff. It did take a while but by July 1994 the lineup was complete. One of those early instrumental compositions was titled "1917" over a sculpture -dated that year- that served as inspiration. When we got an invitation to play live for the first time we didnt have a band name yet, so we ended up picking the title of that first tune we played as a band. It was not the best idea I ever had, but it is what it is! 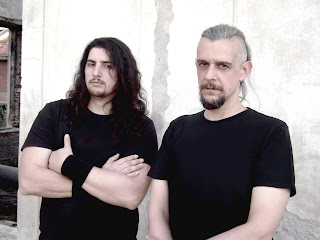 06. Who would you are 1917´s biggest influences over the decades and have they remained the same over the years? For the readers unfamiliar with the band how would you best describe the band´s musucual style?

I think my influences came and come from many sounds and styles. There is a strong old school death metal basis of course, but also a lot of thrash and black metal elements and even some hints of doom here and there. Thats not something I chose to do, it just happened on a natural way. I guess since I did learn music only by listening to many bands, and being a fan of many metal genres, I ended up having some kind of music style myself.

07. "Omnicrisis" is the band´s newest full lenght , how long did it take you to write the music for this release? How long would you say it usually takes to complete one song?

Usually I write a song  during two days, and full album within one or two weeks, but I put it to sleep for some time. Later on, when I think its a good time to record it, I listen to the stuff again to eventually rework details if needed. That's it. In the meanwhile I write stories or ideas that end up on side projects. I also use to write riffs and arrangements that I keep in case I eventually feel like making new songs of them, but it rarely happens, I'm more like starting an album from scratch despite the potentially useful material I already have. 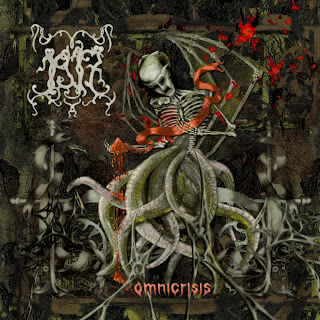 08. Where do you draw inspiration for the lyrics and what are some topics written about on the new release? Which usually comes first, the music of the lyrics?

Lyrics on 1917 are based on my own concerns and observations, so I usually write about the psychology, beliefs and thoughts of the human beings as individuals and as masses often within certain historical contexts, always under the form of an intense yet aesthetic poetry. "Omnicrisis" follows that line and topics, just like all the previous albums. On my side projects I often write about horror or dark feelings, and from time in time I make room to pay tribute to some writers or movies. But 1917 songs are full of anger and somber reflections. In the past both music and lyrics used to come up together; lately I tend to write the music first then I put the lyrics to it.

09. I believe "Omnicrisis" was self-released, did you plan to self release it or would you like to find a label to work with soon?

"Omnicrisis", like most of our previous albums, was self-released. I like to work like that. On the other hand I never felt like seeking for labels while an album is ready to be pressed. I'm not comfortable on that situation, when I finish an album I want to release it with no delays, so I just do it myself. That does not means I'll be reluctant if a label shows up, in fact I'd like to work with someone else who is on the same page than this project. I´m just not likely going to ring doorbells and wait for answers, but when a label is interested I'm up to talking.

The first five or six albums are sold out but the recent releases are still available since some were re released. We dont have any available merch other than the latest albums. A vinyl single and two different tape box-sets were released some time ago and all got sold out immediately, so only some CDs and a DVD+CD titled "Sessiones" are available right now.

11. I believe the band is a two person band, would you like to find new musicians to make a full line-up or do you prefer working as a two man band?

I'm ok being a two piece band. We recruited two more musicians in order to play a fair bunch of live gigs ("Sessiones" came from that period) but now that live activities got so restricted me and Mario (bass player) are focused on recording new stuff and giving extra time to our side projects. 1917 got a full line-up from 1994 to 2001 only, so after so many years working alone or with only one partner I ended up getting used to this dynamic. 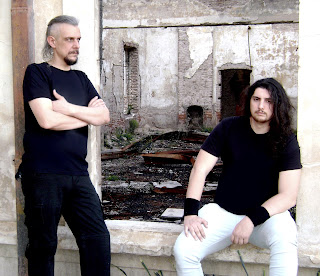 12. What does Underground Metal mean to you and how do you feel the Underground scene has changed over the decades?

Underground means independence and freedom to me, and its almost a synonym to "alternative". Its a space that allows you to be different, to avoid trends and too much impossed rules, to do what you want to do. But its up to each person to take that chance or to ruin it by falling on common places and ambitions. If you ask me what did change over the years since I'm part of this... maybe two or three decades ago underground felt much like what I just described, while nowadays there are a lot of young bands (not all, of course) that take it as an unwanted stage to be in while waiting to be popular or something. Anyway I'm getting quite grumpy as I grow old, so.

13. Alejandro as mentioned you have been part of the Metal Undergrouns scene since the mid 90´s. So I was interested did you read alot of fanzines back in the 90´s and early 00´s? What do you feel made a good fanzine?

I used to read many paper zines back in the day. You know, black n white homemade printings mostly, from different provinces of Argentina and from some other countries like Uruguay, Peru and Bolivia. Sadly none of them did last for too long. Maybe the arrival of webzines had an impact, I mean, similar to how streaming music affects physical formats. I even managed my own webzine long ago! What I look for on zines is independence on its content and true support to honest artists. I´m not interested on "breaking news" nor gossip.

14. What were some of your favorite fanzines to read back in the day? Are they any current fan or web zines that you like to read and keep up with?

One of my favorite zines back in the day was one called Sacrilegio. It looked very professional and was involved on extreme metal mostly, which was awesome at that time. One of my favs from outside Argentina was Alerta Subterránea. Concerning webzines, I just surf on looking for interesting ones, there are a lot to discover.

15. Besides fanzines I know tape-trading was huge part of the Underground scene, did you do much tape-trading? What were some of the early demos and releases that you traded for?

I did a lot of tape trading but with friends, I did not have the chance to contact bands until I was already involved in the scene. I lived in a quite isolated town, not too close to bigger cities, so since official releases were hard to find I was interested on any kind of stuff as long as it was related to metal. By mid 90´s I ended up traveling to buy CDs and tapes, and that´s when I started to collect both albums and demos of bands and labels from every country I could find.

16. When you need to take a break from working on new music or band business what do you like to do in your free time?

I dont need and actually I dont want a break from working on both music and literature!

17. Thank you Alejandro for taking the time to fill this interview out, do you have any final comments for the readers?

Thank you for the space and the support, I really appreciate it! To all those who want to contact us,