Interview with Corrosive done by Patrick posted on 4-16-19


Interview  with Corrosive  done by Patrick


1.Hello how are things going in Germany this week? Please introduce yourself to the readers?
Hi I am Sascha, the Bass Player and Backing Vocalist from Germany´s Death Metal Band Corrosive. In Germany everything is fine this week. Only the weather is not so fine. 😉

2.Corrosive was originally started back in 1995 when did you first meet the other members of the band?How did you all choose Corrosive as the name of the band?
We started in1994. All Bandmembers went to school together. Our Guitarist saw the word on a Canister in a Service Station. We thought “ wow it sound´s cool “ . So we took Corrosive.

3.Who would you say are Corrosive's biggest influences? How do you feel the bands musicial style has changed over the years or has it stayed in the same vein over the years?
Corrosive´s biggest influence, mhhh that is a very good question. We have many influences in our music. We are three people who wrote the music and every one of us has other favorites. Jona wrote Songs in the American Style. Stephan has more Swedish and Black Metal influences in his Songs and I wrote Songs that lay between the other two songwriters.

4.Nourished By Blood is the bands third full length release how long did it take the band to write the music for the new release? How long would you say it usually takes to complete one song?
When we released “Lucifer gave the Faith” in December2012 it tookuntil next Spring and most of the Songs were ready.

5.On the new release the last song is a cover of the Ghostbusters theme song when did you all get the idea to do a cover of this classic song? Does the band play any other cover songs?
Ghostbusters is actual our only Cover Song. But in the Past we had some Cover Songs like Hypocrisy´s “Roswell 47”. However, we never had before a Pop song as a cover version, but we like it very much. We are all fans of the 80ies Music and I think that we eventually will have another 80ies Cover Song on the next Album.

6.Who usually handles writing the lyrics for the music and what are some of the subjects written about on Nourished By Blood? Which usually comes first the music or the lyrics?
Normally our Singer Andy wrote all Lyrics. However, on this Album it is the first time that he was not the only writer of the lyrics. Our guitarist Jona wrote “Holy Priest” that is about Educational Priest that like little boys and I wrote the Lyrics for “Field of Corpses” and “Blind Eyes”. The theme of this two Songs is war and the destruction of the Earth. Between that, we had songs about witches, and magic on our Album. A Mix of typical Death Metal Themes and critical Themes that are actual. In the beginning of a song is the music. After the music of a song where written, Andy wrote the Lyrics.

7.Besides the upcoming Nourished By Blood release are the bands previous releases still available to purchase? Other then physical releases does the band have any other merchandise available for the readers if yes what is available and where can the readers buy it?
we has a lot of Stuff like Shirts and a older Album and EP in our Bandcamp Store.
www.corrosivemr.bandcamp.comsivemr.bandcamp.com

8.What have been some of the bands most memorable shows and tours over the years?And who have been some of the bands you have had the opportunity to share the stage with?
Since Corrosive started until our break in 2008. Most we played little Clubshow´s.
Worth mentioning would be only one show with Krisiun in 1998. After our Reunion we played the Metal Franconia Festival with Grave for example.

9.Are their any tours or shows planned in support of Nourished By Blood? If yes where will the band be playing and who are some bands you will be sharing the stage with?
We will play a lot of single Shows. The Oarty San Warm Up Show with Purgatory or the Burgbrand open air with God Dethroned and Warpath to name a couple.

10.What does Underground Metal mean to you?
Underground means a little bit of Family to me.

12.Who are your all-time favorite bands coming out of the German metal scene? And are their any new bands you feel the readers should check out soon?
My all- time favorites Bands from Germany are Helloween, Fleshcrawl, Sodom, Atrocity and a lot more. There are many new killer Bands in Germany. I can not List all of them.

13.Besides bands are their any honest and reliable labels or distro's you could recommend to the readers?
At first our own Label “Black Sunset/ MDD Records”. Markus and Kai do a great Job for us. But Germany has a lot more of little Labels where guys do a great job because they love the Music.

14.When you need to take a break from working on new music or band business what do you like to do in your free time?
I love it to walk with my Dog in the Woods and when I don´t walk with him I love it to lay on my Couch and to look some series on Netflix

15.Besides working in Corrosive do any of the members currently play in any other bands or solo projects? If yes please tell the readers a little about them?
Our Guitarist Stephan is the only one who have other Band beside Corrosive. The Band is called Kalabis and it is a Rock Band where he played Bass.

16.Thank you for taking the time to fill this interview out do you have any final comments for the readers?
Yes, I take this opportunity to say thank you for the support. I hope we will see you on a Show in the future.

Email ThisBlogThis!Share to TwitterShare to FacebookShare to Pinterest
Labels: Interview with Corrosive done by Patrick posted on 4-16-19 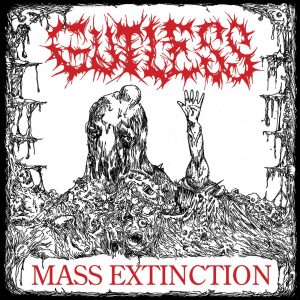 Gutless--Mass Extinction cd {Chaos Rec.}
Coming out of Australia's death metal scene is Gutless with their debut demo getting a cd release through Mexico's Chaos Rec.Mass Extinction is five songs of dark and heavy death metal with some old school influences.The guitars are a mix of crazed and fast thrashy guitar patterns and some heavier mid paced guitar patterns mixed into the music.The drums are done with extremely fast paced drum patterns that fit well with Gutless's musical style.The drummer does slow to a calmer more mid paced drum structure throughout the songs.The vocals are heavy death metal growls that  fit the bands musicial style nicely.If you are looking for a solid and well written and performed release then do yourself a favor and pick up a copy of Mass Extinction  when it is released. 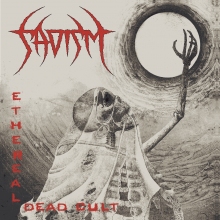 Sadism--Ethereal Dead Cult cd {Toxic Records/Mechanix}
Coming out of Chile's old school death metal scene is Sadism has been releasing metal since the late 80's.Ethereal Dead is the bands eighth full length release featuring ten tracks of aggressive old school death metal.The guitars are played with both extremely fast guitar passages and some slower,calmer mid paced patterns,The guitarist plays some extremely well written and performed passages within the songs.The vocals are gruff death metal growls with some deeper growls used throughout a few of the songs.If you are a fan of  well written and performed old school death metal then do yourself a favor and be sure to pick up a copy of Ethereal Dead Cult  today.
Label  Contacts
https://toxicrecords.bandcamp.com/music
https://www.facebook.com/ToxicRecordsOfficial/