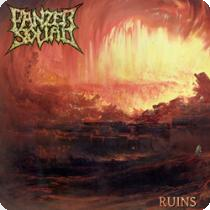 Panzer Squad--Ruins cd {Testimony Rec.}
Panzer Squad are an intense and aggressive thrash metal band from Germany.Their second release Ruins will be released in August through Testimony Records.The music is in the vein of early 80's thrash gods like early Slayer and Kreator and similar bands.The musicians can write and play both extremely fast and chaotic music but also write and perform some well written music patterns that range from extremely fast to a calmer mid paced style.The vocals are raw gruff screams that fit Panzer Squad's music perfectly.The guitars are played with lightning fast guitars riffs and patterns.The guitarist does slow to a mid paced slower range in some of the songs and also adds some solo's mixed into the music.If you are a fan of early slayer,Kreator and well performed thrash metal then defintly pick up a copy of Ruins when it is released.