Interview with Archemoron done by Patrick posted on 7-22-18

Interview with Archemoron done by Patrick


1.Hello how is life in Greece these days? Please introduce yourself to the readers?
Typical boring west-side life with too much hot and curious tourists. I am Melikertiis, guitar player of Archemoron.

2.You all started Archemoron in 2008 when did you first get the idea to start this band?And how did you choose Archemoron as the name of the band does it have a special meaning? The idea to start a band was back in 1999. Our name was Ancestor and we’ve played thrash metal. Due to the fact that there were two or three bands with the same name at that period, plus new members in the band and new musical direction, we rebaptised the band in 2008. The new name was Archemoron. It is a Hellenic word and it means the beginning of death. Happy things always. 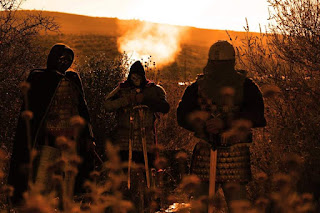 
5.Does the whole band take part in the writing process or does one member write everything?
The two guitarists come with the music ideas and everyone has his impact until the song comes to an end. G.T put the drum rhythms, Aristomenes put the voice lines but generally we have a lot of conversation and democracy because everyone has his own opinion about everything and everyone wants the best for the band.


6.Who usually handles writing the lyrics and what are some topics you all wrote about on the new release?
As concern as lyrics, Aristomenes, G.T. and me have the task. We speak about esoteric themes, war-machine stuff and philosophic themes. For example Sisyphean Agos talks about the myth of Sisyphus, who was condemned by the Gods to push all day a big rock until the top of a mountain and while he was reaching the top then the rock was rolling down to the bottom end. And to the top again. And to the bottom down again. That’s our life. All our efforts to reach the top will end to bottom…just to begin again the road up high.


7.Has Archemoron ever thought of making a music video for any of the bands songs? If you had the opportunity to make a video for any of the songs off of the Year Of The Harvester which song would you like to see made into a video?
It is in our mind to make a music video. Perhaps in the upcoming record. For the “Year of the Harvester” album I thing that “Crawling Plague” would be the song.


8.Does Archemoron play live very often or do you prefer to work in the studio? What have been some of the bands most memorable shows over the years?
We don’t play live. We hate the live contact. That is a reason why we wear masks in our photo sessions. We are not entertainers in order to drink your beer a nice evening with your girlfriend and mess around. We are musicians that express ourselves through music. Dangerous persons with complicated characters. Not the one for company and discussion. Perhaps in the future we will give a special live for true fans and friends, but it will be held in a holy place, everyone will wear a cape and they will have to show all the cd of the band at the entrance of the place.
Our routine goes as follows: every week we have one rehearsal in our rehearsal studio and when we are ready with the songs, then back to studio for recording.

9.Are their any shows or tours coming up in support of Year Of The Harvester? If yes where will the band be playing and who are some bands you will be sharing the stage with?
There will not be any live performance in support of “The Year of the Harvester”. The only support for the new album will be through reviews and interviews.

10.Besides playing in Archemoron do you or any of the members currently play in any other bands or solo projects?
Our drummer G.T. plays also in Resurgency and Ravencult, Aristomenes plays drums in Necrophobic Revulsion and Typhonas is ready to record his first album with “Cape in the Mist”.

12.Who are your all-time favorite bands coming out of Greece? And are their any new bands you feel the readers should check out soon?
I don’t have an all-time favorite band from Greece, especially in black metal. But I think Warlord is one my beloved. If you are a death metal fan you should check out Resurgency, Vulnus, Inveracity and Dead Congregation. For the black souls Ravencult is the name.

14.Thank you for taking the time to fill this interview out do you have any final comments for the readers?
As concern as our latest album “Year of the Harvester”, enjoy! As concern as readers, I will say this “You are the best, you deserve the best and no one will get you down. Keep up doing what makes you feel complete and raise up high the torch of black mayhem in this rotten world.