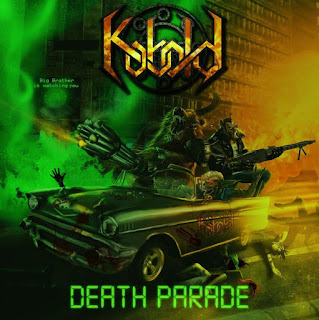 Kobold--Death Parade  cd {Iron,Blood,And Death Corp.}
After releasing a EP. in 2015 and a live release in 2017 Serbia's Kobold release their debut full length.Death Parade contains thirteen songs of well  written and performed thrash metal going from an all out assult of aggressive patterens to a more controlled and well performed mid paced style.The vocals are thrashy screams and some well sung clean vocals even adding some group chants in some of the songs.The drums are played with a lot of skill and writing ability that range from allout blasting drums to a more controlled mid paced drum pattern.If you are a fan of well executed thrash that has influences from both the 80's and some newer elements  then do yourself a favor and pick up a copy of Death Parade  today.
Label  Contacts
https://ibdclabel666.bigcartel.com/
https://ironbloodanddeath.bandcamp.com/
https://www.facebook.com/ibdc666
Band  Contacts
https://koboldthrash.bandcamp.com/
https://www.facebook.com/KoboldCrew/
Posted by Winter Torment Web-zine at 11:03 AM