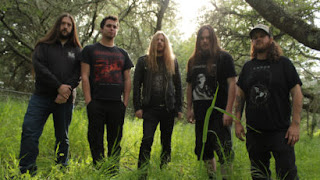 1.Hello please introduce yourself to the readers?

We are the purveyors of your perpetual nullification.

Ed and Dave have known each other since 2005 when they joined the same band and shared a studio space with our old BA bassist Karl, Ryan and Anthony were in the same circle of friends, Ed worked with our old BA drummer Dylan, and Morgan we met when BA started gigging with his other band Argentavis.

For the name, we were already toying with something that had the name altar in it while forming the band in 2013. As soon as we came up with the idea Barren Altar, it just seemed to click. As Ryan has put it before, to us it means a ritual site where man in his desperation finally prostrates himself before the void. He begs for forgiveness and absolution. He offers prayers and sacrifices that are destined to go unanswered, for all prayer is vanity and no one is there to listen.

3.What is the current line up of the band and for the readers who have never heard the band how would you best describe the bands sound and style?

Our current lineup is Ryan, Ed, Anthony, Morgan, and Dave.
We would describe our style as Blackened Doom. Sound wise, a cacophony of swampy riffs that drown you, melodies that lift you up and then shred your spirit, and swells of tempo that keep you battered and focused on the pain.

4.Entrenched In The Faults Of The Earth is the bands debut which I believe is self-released did you and the band plan to self release the debut or would you like to find a label to work with?

It is self released. We are currently looking for label help with distribution as well as putting the release on vinyl.

5.How long did it take the band to write the music for the debut release? Does the whole band take part in the writing process or does one member usually write everything?

Writing new material can take a few days or even several years. For example the opening riff of the first track was written by Ed 16 years ago for another band he had back in 2002! We try to utilize all of our options when writing and pull from any source that we have available. The final product just depends on when we decide it stands up to our level of quality. We typically start with anything between riffs to full song ideas, then bring them to the table to develop together and sort of let the composition take a life of it's own through shared ideas and jamming.

6.Who usually handles writing the lyrics for the music and what are some subjects written about on the debut full length?
Ryan handles the lyrical content. To him each song is a meditation on destruction. Destroying our gods, destroying ourselves, and destroying each other.

7.Besides the Entrenched In The Faults Of The Earth debut does the band have any of the past releases or merchandise available for the readers?If yes what is available and where can the readers buy it?

We have our initial EP, A Monument to Endless Suffering, which had small DIY runs of CDs, a split vinyl with Argentavis whom Morgan also plays in, and a 2 song tape Maithuna. Currently all material is available digitally on our Bandcamp page as well as our physical CD and Tape. https://barrenaltar.bandcamp.com/

We also sell shirts and home made leather burned patches at shows only, for now.

8.Has Barren Altar ever made a video for any of the songs? If you had the opportunity to make a video for any songs off the debut release which song would you like to see made into a video?

No videos at this time, but we're definitely open to the idea. we'd probably most like to have Call To The Waves put to a video due to it's dramatic swings in tempo and moods.

9.I believe Barren Altar is getting ready to do a small U.S tour in the end of June.Where will the band be playing and who are some bands you will be sharing the stage with?
We just got back from the tour, 10 shows through the pacific northwest. We played with a lot of local bands as well as one of the dates of the Uada, Wolvhammer, and The Black Moriah tour. Back in 2014 we played our very first show at Festum Carnis and shared the stage with Ceremonial Castings among others. Members of that band are currenty in Uada and they have been very supportive ever since. We stayed in contact, and they asked us to join them for this show in Portland. We had a blast for sure.

10.Besides the upcoming tour are their any other shows or tours planned for this summer or fall? If yes where will the band be playing?

We have a couple shows coming up locally, no other tours at this time but plan to head out again next year to hopefully play some fests as well.

11.When you need to take a break from working on music or band business what do you like to do in your free time?

Drinkin', smokin' weed, and all types of ill shit.

12.Thank you for taking the time to fill this interview out do you have any final comments for the readers?