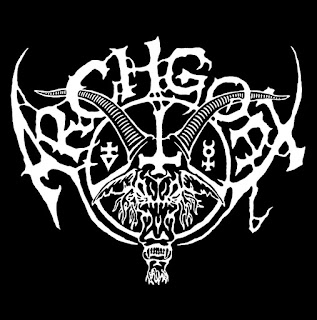 Interview  with Ritual Butcher guitarist of ArchGoat done by Patrick

1.Hails Ritual Butcherer please introduce yourself to the readers?
I am the one your mother warned you about. The spokesman of Lucifer and devotee of Left Hand Path. I am founding member of Archgoat and play guitar in the band. I hail from the cold cold country called Finland where the polar bears roam on the streets and eat Santa’s little elfs.

2.When did you first start listening to metal music and was it long before you discovered black metal?
All my life I have been – thanks to my parents – listening the hardest music there has been. The first music release I ever owned was Iron Maidens “Power Slave” when I was 11 years old and things kind of naturally progressed from there. Next I was listening to speed metal and trash metal and every time something louder and faster came I was totally drawn towards it. Within one year I had moved from Iron Maiden to Slayer whose “Show no Mercy” had just came out and set the bar for others to surpass. It was very interesting time because then there were barriers broken almost monthly with some bands inventing new things to outplay the others. In 1985 the first black metal release I heard was Venom´s “Possessed” which stood out really as something totally different from the other bands. The band member pictures with demonic names, song names and openly satanic lyrics really caught my attention. In no time I had Celtic Frosts “Morbid tales” in my possession and found this release as one of the life altering releases. Even today this release stands in heights for me no other band has reached.

3.Who were some of the first bands you heard and who are some of your current favorite bands?
During adolescence when my journey really was only starting I really listened much Slayer, Celtic Frost, Carcass and Possessed. These bands really changed my dna as it turned out duting my life and where it has brought me. Today my current favourite bands are Slayer, Celtic Frost, Carcass and Possessed.

4.Back in the late 80's and 90's were you a big reader of fanzines?What were some of your favorite fanzines that you read?
Absolutely I was a big fan of good zines like Hammer of Damnation and Fallen Pages from Finland. I honestly have to say that it is almost 30 years ago so I can’t really remember what the names of the other zines were but I was ordering these from abroad and also buyng from the local small distros like Silenced Souls and Come Back records.

5.Are their any current fanzines these days that you read?Do you read or keep up with any web-zines?
I don’t get too much zines anymore. Earlier there were always flyers in the letters so it was easy to find zines that had inties with the bands I was interested about. But today I don’t write letters like earlier and rely more on modern real time communicating so I don’t find flyers and really don’t google after them either. But whenever visiting a friend I find a zine I always read with interest. I really don’t either follow webzines. I have been playing so many years that I more or less know quite a many people in the genre personally so I rather communicate with them directly rather than reading from a zine.

6.Ritual Butcherer you formed ArchGoat with your brother Lord Angelslayer{vocals,bassist} in 1989 when did you two first get the idea to start this band?Why did you all stop the band in 1993?
We had been playing in our locals bands but never together. I played in a thrash metal band in 1986 and Angelslayer in grind core band with our to be drummer Blood Desecrator. Their band broke up and I found up myself starting a death metal band with Blood Desecrator in 1987 which we did for one and half year. On that time we started to be so interested about black metal that we wanted to kill the death metal bands and move on to black metal band but had no band members other than my brother to recruit who was on the same page like us and that is how we started the band. In 1989 in Finland to play black metal was something very few can understand how much we were off from even extreme metals main stream. When in 1994 the Norwegian bands started to land big deals with major labels that opened the doors of this scene to everybody because suddenly underground was over ground. Many people without s slightest idea about Satanism started to copycat and play black metal for other reasons than what I held sacred so this really disgusted me and this feeling only got stronger and stronger inside me until we had enough and wanted to climb out from this pool of shit called black metal scene. It was polluted and we didn’t want our band to assimilated to this genre.

7.You reformed ArchGoat in 2004 what gave you all the idea to restart the band? And how do you feel the bands musicial style has changed over the years?
It was myself first unsuccessfully in 2003 and one year later Angelslayer talked me into band and here we are now 14 years later. It really was something that is difficult to explain but in a way there was this pressure building up year after year that needed a way to be releases and for me there was no other way than playing this music. The first rehearsal we did was like we had never been away and like embracing an old friend. It felt like this was bound to happen and been written inside us to happen. I see there some changes but the major topics and the focus is like what it was when we started. Maybe there is more complexity in our works today and of course the musical abilities have grown during these years that also give us more tools to compose and complete songs than earlier. As the philosophical journey of mine has been a long one and I have understood more and more about my religion there is certain growth in every albums lyrics chronologically. 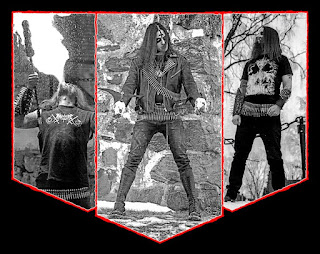 8.The Luciferian Crown is the bands newest full length release how long did it take the band to write the music for the new release?Does the whole band take part in the writing process or does one member write everything?
Earlier we did things more together but with time and since Heavenly Vulva I have been composing all our music and writing the lyrics. It took me about 18 months to finalize The Luciferian Crown but this time I really wanted to take my time and experience with new elements I had not done before. This was possible for me as I got this recording program that enabled me to record at home and from that I checked just prior last recordings that I had usedthe program about 440 hours so with everything I would estimate this album took me about 100hours to finalize with lyrics and everything.

9.Besides the upcoming full length release are the bands previous releases still available to purchase?Besides physical releases does the band have any other merchandise available for the readers if yes what is available and where can the readers buy it?

All our previous are available or if not right now after few months as Debemur Morti is doing represses. We have merchandise but sell only at shows so we keep out from mailing things as it really takes time I don’t have to sacrifice to this kind of activity. On our shows we tend to have interesting merch with us like some original long time ago sold out versions.

10.What have been some of ArchGoat's most memorable shows over the years?And who are some bands you have had the pleasure to share the stage with?
I would first point out to our first show sometime in 1991 in our home town of Turku. Remember that I had some sort of stage fright and my legs were shaking throughout the hole show and I asked my friends in the audience did it show – luckily it didn’t. Then there would be in 2005 our first show after comeback in Kouvola and right after that our first one outside Finland in London. There are really many shows that I have special memories from like Bangkok were we played in front of 400 maniacs about 2 meters high on a giant stage barricaded with barbed wire. There were people climbing that fence and it was just one of the most energetic atmospheres I have experienced. We have played with so many bands that it would be not possible to remember all but of course I have enjoyed a lot playing with Valkyrja (obviously after 4 tours and two coming ones), Blasphemy, Bölzer and so on.

11.Are their any upcoming tours or shows planned in support of the new release?If yes where will the band be playing and who are some bands you will be sharing the stage with?
We play a 5 show mini tour in Asia in start of November and after that do a 3 week European tour with Marduk and Valkyrja. Also we have started the planning for the 2019 tours so we will be quite busy next year.

12.How do you feel the black metal scene has changed over the decades?And what is your opinion of the current black metal scene?
The underground has become over ground so the scene is quite big and I might add watered down compared to the close knitted scene of old times. There are so many people playing this music for the reasons that don’t connect with me and witch I don’t understand but then again also new bands coming that would have been like at home back in 80´s scene.

13.ArchGoat comes out of the legendary Finnish black metal scene what is your opinion of Finland's black metal scene over the years?
I think the scene is vital in heading towards good direction. There are new bands like Malum and Blood Chalice who are doing a great musically and understand the philosophy of the game. In between mid 90´s till today there were really many bands which kind of over bloated the local scene here to be quite repulsive and weak in my opinion. But today I don’t follow too much what is happening in the scene – I am more interested about where we are heading than where others are going.

14.Who are your all-time favorite black metal bands coming out of Finland? Are their any new Finnish bands you feel the readers should check out soon?
Easy questions; Lord Diabolus (Beherit prior DDtM) is for me the all-time favourite coming from Finland. I would highly suggest people to check the fore mentioned Malum and Blood Chalice. Malum plays typical Finnish raw style of Black metal where Blood Chalice remind me very much about Black Witchery. Both worth checking.

15.Thank you Ritual Butcherer for taking the time to fill this interview out do you have any final comments for the readers?
Thank you for the interesting interview – the pleasure was mine. See you people on the road!