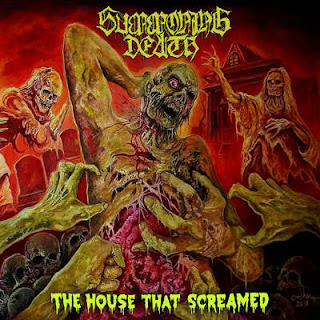 Summoning Death--The House That Screamed cd {Chaos Records}
Coming out of Mexico's old school death metal scene is Summoning Death.The House That Screamed is the debut release featuring thirteen songs of horror-inspired old school death metal influenced from horror movies from the 60's through the 80's.The vocals are a mix of raw,old school gruff growls and some deeper death metal growls.The guitars are played with alot of skill and experience going from a crazy fast style to a more controlled mid paced style.The guitarist even adds some well performed solo's and guitar patterns.If you enjoy bands such as Amorphis{the first release},early Grave and the likes  then do yourself a favor and pick up a copy of The House That Screamed when it is released.