Interview with DungeonHammer done by Patrick posted on 9-24-18

Interview with DungeonHammer done by Patrick

1.Hails please introduce yourselves to the readers?

Hi we are E:Vocals, guitars, bass and R: Drums

2.When did you first start listening to metal music and who were some of the first bands you listened to?Who are some of your current favorite bands that you listen to?
E: I started listening to extreme metal when I was 18 years old with Morbid Angel, Death, Carcass. Before that I discovered metal with Metallica and Megadeth, starting to learn the guitar at 15 years old.
My current favorite bands are Antichrist, Condor, Nekromantheon, Krypts, Nahtrunar
R: I started listening to metal when I was 14 or 15. My best friend's older brother made me a mix tape with Carcass, Slayer and Motorhead, it was a really great introduction into metal. I started from this tape and explored some more on my own: Gorefest, Entombed, Dismember... classic stuff. After that it was the pure underground stuff. Currently I listen a lot to Occvlta, Portal, Iskandr and Turia.

3. DungeonHammer was started in2009 what gave you two the idea to start this band?And how did you two decide on DungeonHammer as the name of the band?
E+R: We had the chance to see Celtic Frost live in Milan in 2006, during the promotion of Monotheist: It was truly a revelation!
The band is a simple merging of the words Dungeon (from Darthrone song "The Winds They Called The Dungeon Shaker") and Hammer (Hellhammer reference of course). 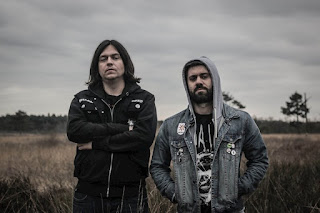 4.Who would you say are the bands biggest influences?And for the readers who have never heard DungeonHammer's music how could you best describe it?
E+R: Our biggest influences are Hellhammer/Celtic Frost, Bathory, Discharge, Anti Cimex and other D-beat/crust bands. But we also listen to a lot of old school death metal and 2nd wave of black metal bands.

5.Infernal Moon is the debut full length release and i know you both live in different countries.So i was curious do you both take part in the writing process or does one member write everything?How long does it usually take to complete one song?
E+R: We start with riffs that E comes up with, and then we work together on the song structure: adding drums, solos and vocal patterns to complete the song. Each track on the album was made this way, but sometimes 2 separate songs were merged into a better one. It felt like one big puzzle sometimes. Because we live in 2 different countries, we demo-ed every song before hitting the studio to get a complete layout of the structure.

6.E. you handle the vocals for the band so i assume you write the lyrics for the music what are some topics you wrote about on the debut release?
E: On the album I wrote the lyrics for 5 songs, for the other 3 songs we worked together.
The topics mainly tackled are witchery/occult concepts, for which I'm influenced by 19th century french writers like De Guaïta, Michelet, Huysmans.

7.Besides the upcoming debut release are the bands previous splits still availible for the readers to purchase?Besides physical releases do you all have any other merchandise availible if yes what is availible and where can the readers buy it?
E+R: We don't have any copies of the splits left to sell. Some underground distros might still have some copies left. You probably have to go through discogs to find a copy.

8.Besides working in DungeonHammer do either of you work in any other bands or solo projects? If yes please tell the readers a little about them?
E: I play in a garage/punk band called Iron Lizards (vocals and guitars).
R: I play in a lot of bands ranging from experimental (Dead Neanderthals + Celestial Bodies) to punk (Heavy Natural) to death metal (Cryptae). You can find it all on bandcamp.

9.E.you handle the vocals for the band when did you first start screaming and singing? Do you do anything special to keep your throat and voice healthy?
E: I started screaming with death metal covers with a band a long time ago. I try to sing using my stomach as much as possible in order to keep my voice healthy.

10.Who are your influences and favorite vocalists?
E: Tom G Warrior and Lemmy Kilmister of course, but also David Vincent and Nick Holmes.

11.Besides the vocals you also take care of the guitars for the band when did you first become interested in playing the guitar?Are you self taught or did you take lessons when first starting out?
E: I'm self taught, I've first played the guitar when I was a teenager with "Five of the best" tabs of Metallica, and a collection of Hendrix tabs, we didn't have youtube and online tabs at the moment! After that, (with the help of the internet), I learned riffs by Death, Morbid Angel, Obituary and I've played a lot along cds by listening carfully.

12.R.you play the drums in the band when did you first become interested in playing the drums? Are you self taught or did you take lessons when first starting out?
R: I was always interested in drums. Whenever I heard a song on the radio, I always immediately paid attention to the drums. Unfortunately, I never took lessons when I was a kid. I guess my parents never wanted those noises in the house (and I can't blame them). So when I was 25 or so, I decided it was time to take matters into my own hand. I booked some lessons and a rehearsal space to practice. Soon after that I started playing with E. Being in a band is the best way to learn and improve your skills.

13.Who would you say are some of your favorite drummers?Besides the drums do you currently play any other instruments?
R: I do vocals in Cryptae, but besides that it's only drums. Some of my favorite drummes are Des Kensel (High on Fire) and Rashied Ali.

14.When you need to take a break from working on new music or band business what do you like to do in your free time?
E: I love movies, specially giallos and horror movies from the 70s, but I also like going to the cinema.
Besides that, I also enjoy listening to my LPs collection while drinking Bordeaux wine, or beer.
R: I never take a break from new music or band stuff...

15.Thank you R. and E. for taking the time to fill this interview out do you have any final comments for the readers?
E+R: Thank you Patrick. Hope you maniacs like the new album! https://pulverised.bandcamp.com/album/infernal-moon