1. Hello please introduce yourself to the readers?
-Hi, I am W.D. from Dead Soul Alliance


2. When did you first discover death metal and who were the first bands you listened to? Are their any current bands that have caught your attention lately?
- Having discovered crust & grindcore way back when and liking some of the crossover stuff and thrash already as well, this all took me into the heavier side of things and then I slowly got more introduced to
the more extreme forms of death metal & black metal of the 1990's era on. There are many bands world wide that have caught my attention so to name just a few in the more recent times, I would say Cruciamentum, Graceless & Massive Assault.


3. When did you first get the idea to start Dead Soul Alliance and are you satisfied with how things have gone over the years?
- The idea for it all began in 2010 and then things continued on from there. Things have been alright, there have been changes for the better since the beginning and refining what is best for the band for both audio and representation wise.


4. Who would you say are the bands biggest influences and for the readers who have not heard the bands music how would you best describe it?
- The old school death metal sound or styles of the later 1980's to early 1990's era is a big influence on its own and could be described as a description for the sound. However, the death metal bands from Florida like Brutality, Massacre & Obituary
certainly are an influence and on the other sides of things, the different Scandinavian bands like Dismember, Demigod, Adramelech, & Entombed are also an influences, plus, the British bands like older Carcass and Bolt Thrower too.


5. I believe Dead Soul Alliance is a two man band would you like to find more musicians to make the band a full lineup or do you prefer to work as a two piece?
- With trying to find members or people to take an interest in us in the past and having little or no interest in the Ottawa area or the right kind of "fit" for it, I personally got tired of waiting on people and decided to go ahead with writing and recording to get the music out there. I worked with some "guest members" or some session people as well before to help with things and it served its purpose at the time. So in truth, the two piece band thing in more recent times became a more productive entity and in accomplishing things.


6. If you had the opportunity to work with any musicians{past or present} who would you like to work with?
- Interesting question, I would gladly work with Dan Swano. I like the bands that he has been a part of past or present or recorded or produced over the years. He does great work and gets great results!


7. Slaves To The Apocalypse is the bands new EP. which will be released through Dawning Septic Prod. when did you first come in contact with this label?
- Yes it is but it was originally released by us independently on CD first in 2017. They contacted us in early 2019 about doing a tape version for this release and we thought it would be cool with all the tape nostalgia going on now. 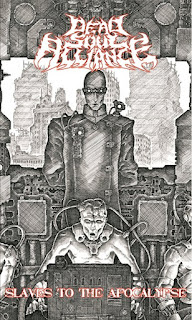 8. How long did it take to write the music for the new release & do you both work on the music? How long would you say it takes to complete one song?
- Most of the music for this was already written by myself for the rhythm part of things in a few months time originally. With Shawn agreeing to handle the drums and work with me for the new songs, we began jamming together soon after
to get the songs down in preparation for the future recording. During this time, I wrote 2nd guitar lines & leads and the bass lines. Then the vocals with the lyrics after. So, I am guessing with the full jamming & writing part was done over six or so month's time before the actual recording took place.


9. Where do you draw inspiration for the lyrics and what are some topics written about on Slaves To The Apocalypse? Which usually comes first the music or the lyrics?
- The concepts of life, death, the universe and the questioning of all existence in relation to the truth is a big inspiration. Topic matters of the real "powers that be", power & control, lies & conspiracies, misanthropy, religion and other life forms are some of the topics. Both the music and lyrics are equally important to me but usually the music part is written first then the lyrics are applied after.


10. Besides the upcoming Slaves To The Apocalypse release are the bands previous releases still available for the readers to purchase? Besides physical releases does the band have any other merchandise currently available if yes what is available and where can the readers buy it?
- We do not have any more of our past CDs available or for sale ourselves but through the Dawning Septic store they have a few of our last remaining CDs left and for sale there. I think there is 1 copy left of Slaves to the Apocalypse on CD there and
a few more of the previous release Proud to Die. Otherwise, with our bandcamp site, it has the downloads available and of course the new tape version of Slaves to the Apocalypse. https://deadsoulalliance.bandcamp.com/


11. Dead Soul Alliance comes out of Canada's old school death metal scene what is your opinion of the scene in Canada over the years?
- Since Dead Soul Alliance originally began in 2010 in Ottawa, Canada, we are not really a part of the old school death scene here to be honest and are kind of on our own in the more modern times for the most part, especially with writing in this style
now. With ourselves, not being "new" to old school death metal styles by any means and being veterans of past metal bands and being involved in the metal scene here since the early 1990's on, for us Dead Soul Alliance was something we wanted
to go back to with our roots and what got us into death metal in the first place. So, other than a few bands I can think of in the Ottawa/Gatineau region specifically, most of the bands from this area tend to be more on the brutal tech death side of things in what they are doing. With the rest of Canada from coast to coast there are pockets of various bands and styles through out that are certainly great! I guess it depends on your metal preferences or the type of metal bands you like but I think overall  that Canada has created a strong impression to the world over time that there is certainly a lot of talent here. There is more exposure for bands, for tours and venues now and with that, the interest for metal in general has grown and has spread out further than before. Some of my favourite bands to this day come out of the province of Quebec and I feel they have one of the best places in all of Canada for bands, venues and tours that go through there!


12. Who are your all-time favorite bands coming out of Canada and are their any new bands you could recommend to the readers?
- I am still a fan of older Cryptopsy and like Sacrifice & Razor a lot. Other bands I would recommend from Canada whether newer or older and in no particular order are: Outre- Tombe, Satanic, Hellborn, Cruel Fate, Hellacaust, Oath Div. 666,
Saccage, Reversed, Altered Dead, Atroce, Purgatoire, Survival Instinct...


13. Besides working in Dead Soul Alliance do either of you currently play with any other bands or solo projects?
- Shawn is also the drummer in Deamon and currently I am a part of another project called Expunged.


14. When you need to take a break from working on new music or band business what do you like to do in your free time?
- I like seeing live bands, movies, reading, collecting comics, collecting or buying music, getting out in nature or travel at times & having beers with a few of hellraisers I know, lol!


15. Thank you for taking the time to fill this interview out do you have any final comments for the readers?
- No problem and thank you for this interview Patrick! For the readers, please check out our music if you haven't already! Support bands and their music, go to shows, believe in yourself, think for yourself
and trust in what you know to be real, honest and true and not what you are dictated through news, media gossip or history as we live in a world of lies and illusions who are conducting your fate!
Band Contacts
https://www.facebook.com/DeadSoulAlliance/
https://deadsoulalliance.bandcamp.com/
Label Contacts
http://dawningseptic.storenvy.com/?fbclid=IwAR0g92t432FOaQ6-IyXyyCpAihs4rnfN6VqIbpSCh-jm0Vrub6Zr8f02Lzc
https://www.facebook.com/dawningsepticprod/
https://twitter.com/DawningSeptic
Posted by Winter Torment Web-zine at 1:46 PM