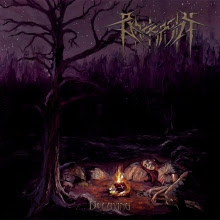 Barkasth--Decaying  cd {Svarga Music}
Coming out of Ukraine's black metal  scene is a new band Barkasth.Decaying is  the debut release  featuring seven  songs of traditional black metal with  some elements of melodic and atmospheric black metal.The vocals are raw black metal screams and some deeper growls and screams.The guitars are done with some well written and performed  patterns.The guitarist can also play and perform both the  faster insane guitar chords  and some  some slower,mid paced patterns. If you are a  fan of old-school black metal with some touches of atmospheric and melodic black metal elements  then do yourself a favor  and pick up a  copy  of  Decaying when it is  released.

Posted by Winter Torment Web-zine at 11:28 AM