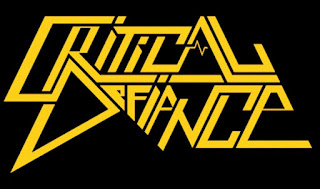 
1.Hello how are things going in Chile this week? Please introduce yourself to the readers?

Hello, I’m Felipe Alvarado from Critical Defiance, a thrash metal band from Villa Alemana, Chile. We decided to create this band in order to play aggressive and violent thrash metal that reflects our deepest emotions and to condemn an increasingly decadent society and generation. Lately, things are going great here in Chile. We had a show last Friday and it was amazing, people reacted with lots of energy to our music. So for us it is cool that they like what we are doing.

2.When did you first start listening to thrash metal and who were the first bands you discovered? Who are some of your current favorite bands in the scene today?
We started listening heavy metal and rock when we were in school (I was in a catholic school by the way). At that time I used to listen to bands like AC/DC, Black Sabbath, Slayer, Iron Maiden, Queen, Metallica and Megadeth; then I met the former guitar player of the band and we started listening thrash metal, basically from the bay area SF and the Chilean scene. Bands like Toxic, Annihilator, Razor and Vio-Lence were and continue to be among our favorites.

3.When did you first meet the other members of the band and was it long before you all started Critical Defiance? How did you all choose Critical Defiance as the name of the band?
All the members of Critical Defiance are devoted thrashers. So, we met at local shows. The guitar player, Felipe Espinoza, was my best friend from school and we both shared the same interest in heavy metal music. And talking about the name, Critical Defiance, it means our resistance against a corrupt society and commercial music that rules the world today.

4.What is the current line up for the band and who would you say are the bands biggest influences?
The current line-up is: Ignacio Arévalo (Bass player), Nicolas Pastene (Drums), Felipe Espinoza (Lead guitar) and finally me, Felipe Alvarado, (Vocals and Rythm/Lead guitar). Our main Influences are Megadeth, Metallica, Voivod, Slayer and Annihilator, also other bands like Yes, Rush, King Crimson, The Beatles and Los Jaivas from Chile.

5.Misconception is the bands debut which will be released in Feb.2019 through Unspeakable Axe Rec. when did you and the band first come in contact with this label?
Our first contact with UAR was back in 2016 when we had the urgent necessity to find a label that shared our same vision. Not only related to music but also related to the message. In UAR we found the loyalty and respect that we were looking for.

6.How long did it take the band to write the music for the debut release? Does the whole band take part in the writing process or does one member write everything?
Basically, the writing process for the debut release was a work that took almost all of our lives and it encompasses all of our experiences. Life lessons, feelings and desires are compacted and putted together in Misconception. The songwriting is made by Felipe Alvarado and each member of the band participates in the arrangements.

7.Who usually handles writing the lyrics for the music and what are some subjects written about on the debut release?
The lyrics were written by Joaquín Muñoz (former member) and Felipe Alvarado. Some of the subjects in the album are violence, war, corruption, political tyranny, the self and our deepest emotions as well as misconceptions rooted in collective thought.

8.Besides the upcoming debut release early next year does the band have any other merchandise currently available for the readers to buy?If yes what is available and where can the readers buy it?
No, we haven’t yet. 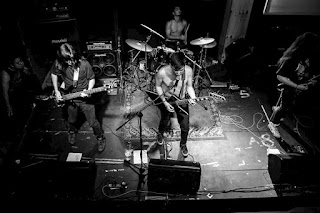 9.Has Critical Defiance had the opportunity to play very many live shows over the last few years? What have been some of the bands most memorable shows so far?
We enjoy every show we do. Here in Chile, the metalheads are fucking insane.

10.Are their any tours or shows planned in 2019 in support of the debut release? If yes where will the band be playing and who are some bands you will be sharing the stage with?
Yes, we want to do a show for our debut release here in Valparaíso. But we have nothing clear yet.

11.When you need to take a break from working on new music and band business what do you like to do in your free time?
Songwriting is a full time job (the second album is almost completed). And we spend our free time playing football, trekking and hanging out with family and friends.

12. Critical Defiance comes out of the Chilean thrash metal scene. What is your opinion of the thrash metal scene in Chile over the years?
We have excellent exponents in the thrash and death metal scene here in Chile, old school bands like Necrosis, Pentagram, Massakre, Warpath; and newer bands like, Mental Devastation, Terror Strike, Demoniac and Ripper which are the best in the local scene. The underground Chilean scene is really passionate about the music.

13.Who are your all-time favorite bands coming out of Chile and are their any new bands you feel the readers should check out soon?
You should definitely check a lot of bands from the Chilean scene we mentioned.

14.Besides playing in Critical Defiance do you or any of the members currently play in any other bands? If yes please tell the readers a little about them?
Felipe Espinoza also plays in Mental Devastation, The Aggressor and Unholyness. Nicolas Pastene is currently in Armored Knight, Unholyness and The Aggressor.

15.Thank you for taking the time to fill this interview out do you have any final comments for the readers?
We are really looking forward to the release of the album; it is a really wonderful experience to have the opportunity to capture our deepest thoughts and turn them into the music that we have loved for many years of our lives.