1.Hails when did you  first discover  metal  music  and  who were  some of the first bands you  listened  to?

Hails! I guess this started in the common way.... my main influences at that time where rock and hard rock. Queen, Deep Purple, Nazareth and so on.... timeless classics!

2.When  did you all get the idea  to  start    Sacrilegious  Rite and who  would you  say  are  the bands  biggest  influences?

Sacrilegious Rite is a follow up of our former band Capitis Damnare (1999-2010)...after that we started sacrilegious rite because we weren’t satisfied with that years situations and the problems it caused.
Sacrilegious Rite does more speak to and through us than CD ever could be. It’s pure! Pure old school metal and pure ideology and belief!

In a matter of fact we are pretty much influenced by old school death and black metal from the end of the 80s to the middle of the 90s. Just to name some examples like grotesque, mystified, sarcofago ....

3.Summoned From Beyond  is  Sacrilegious  Rite's  debut  release how  long  did it  take the band to  write  the music  for this  release?

The material on summoned from beyond is pretty old now. Some songs are on the first songs which we started out with shirt after the founding of sacrilegious rite. Line up changes have always thrown us back in development which is in a way no problem anymore because we decided to go on as a two piece!

4.Who  usually  takes  care of  writing  the lyrics  and what are  some topics written about  on  the debut  release?

All lyrics, since the very beginning have been written by me. The topic is more or less about spirituality, spiritual death and ritualistic travel into the abyss

5.Besides the  debut full length  are any of  the splits or EP's still available?Besides physical releases  does the band have  any other merchandise available if yes where  can the readers  buy it?

We got rid of most material pretty fast. In the underground nothing happens without getting noticed by one or another. On the other hand you always do trades or you’re always in contact with people who share your point and exchange.

6.What  does underground  metal  mean to  you?

Underground has been a very important part in our role as musicians or music enthusiasts. It’s the very foundation a scene is build on. I don’t mean a local scene with that, no some guys you meet and have a beer. Luckily the underground scene is not bound to locations because it’s global. You have your contacts everywhere.... that’s the underground! 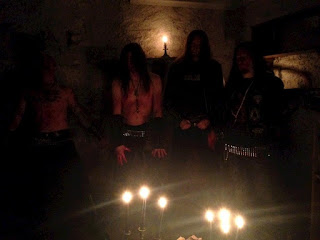 7.Does  Sacrilegious  Rite   play live  very  often  or do you prefer  to  work in  the  studio?Are  their  any tours or shows  coming up  in support  of Summoned From Beyond ?

We play live from time to time. It’s not often and not rare... it holds the weight. We’re fine with our actual live presence.

8.Do you or any of the other members  work  in  any other  bands or solo projects?If  yes please  tell the  readers a little  about  them?

There are none and for a good reason. We prefer to focus our time and energy on just one project than to waste it on inessential stuff.

9.Sacrilegious  Rite   comes out  of Germany's  blackend death metal scene what   are your  thoughts on the German  scene?

Globally most people think that Germany is the country of metal. It’s right It it grands a blessing and a curse. The blessing is that you have a hell of activity here.... there’s hardly a guy who doesn’t play in a band. The resulting curse is that you got overstock of bands which ruins the sight of the market.... you have more quantity than quality which makes it damn difficult for serious bands to rise from an ocean of faceless artists. But I can’t reflect this on the whole scene we have a lot of comrades here and people with serious bands who definitely deserve more attention. But this problem is getting global and it’s getting worse and worse.

10.Who  are your all-time  favorite  German bands and are  their  any  new  bands you  feel  the  readers  should  check  out  soon?

That’s not easy to answer. Early Kreator, Sodom and Destruction for sure! Poison and Protector.... what you should try out is Purgatory! Not new but way too underrated!

11.Besides  bands  are their any honest,reliable  labels and distro's you  could recommend  from Germany?

Sure! For sure I recommend the label we’re under which is Dunkelheit. But there’s also Iron Bonehead, Pegasus and some smaller distros and labels. As mentioned before, Germany got a lot to offer when it comes to metal.

12.Thank you  for  taking  the  time to  fill  this  interview out  are their  any final  words for  the  readers?

I thank all readers for their potential interest in our art. The past is alive when you listen to “Summoned from Beyond”