1.Hello how are you doing this week?Please introduce yourself the readers?

Mike Perun - Bass and vocals for Chicago Death Metal band CIANIDE. I am doing great. Really enjoying this streak of having nothing to do. I'm sure it will end.


2.When did you first start listening to underground metal and who were some of the first bands you listened to?Who are some of your current favorite bands? I started with underground metal back in high school.
Mostly through a local college radio station. Venom, Metallica and Slayer were the bands that caught my ear and I have been brain dead ever since. Name drop some current bands? I dig ABHORRENT FUNERAL, MOLDER and ROTTED. All good shit....


3.Cianide was started back in 1988 when did you first get the idea to start this band? Are you happy with how everthing has gone with band over the years?
Scott Carroll (guitars) and then vocalist Bill Thurman formed the band. It was done to emulate our gods, HELLHAMMER/FROST, SLAUGHTER, DEATHSTRIKE/MASTER, POST MORTEM and DEATH. We've been through a few line up changes over the years but Scott and myself have been the core. Our "new guy" Andy Kuizin (drums) has been in us for over 20 years so. I never thought we'd get this far but here we are still kicking. What else is there to do right? 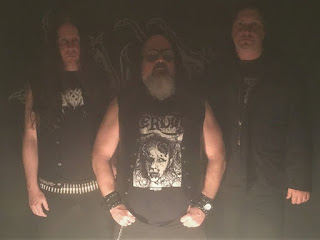 4.Who would you say are Cianide's biggest influences and how do you feel the bands music has changed over the years?
This was answered in the above question, HELLHAMMER/FROST, SLAUGHTER, DEATHSTRIKE/MASTER, POST MORTEM and DEATH. In the early days we weren't very good at our instruments, and probably even more so the case now. Hah. We definitely gotten more speedy over the years, but we still like the slow and heavy stuff. As we get older it's easier to play...


5.Unhumanized is the bands newest EP. released in December how long did it take the band to write the music for the new release?How long does it usually take the band to complete one song?
Writing is an ongoing process for us, since we're not on any deadline there really isn't any pressure for us to come up with anything. Since recording Gods of Death we had maybe 3 new songs down. By then it was like, "Ok let's try to get a few more songs complete then get these recorded. Easier said than done, but there you go... 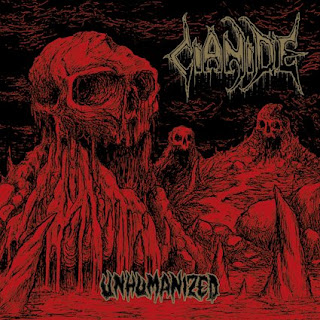 6.Besides the Unhumanized release are the bands previous releases still available for the readers to purchase?Besides physical releases does the band have any other merchandise currently available?
The CD reissues of our first 2 albums are still available. HH and Dark Descent should have both in stock. Other than that we have shirts, patches, tapes. The usual band stuff you see at shows. Now we just have to find a way to sell 'em...


7.What have been some of Cianide's most memorable shows over the years?Who are some of your most favorite bands that you have gotten to share the stage with?
The first time we played MDF in 2011 was pretty memorable. Our new album wasn't quite yet released and at that time we hadn't played live for 3 years. It was 4 in the afternoon, hotter than piss and we were hung over as hell. I'm not sure how we made through that set. It was kinda a game changer for us though. Put us back on the map so to speak. The 2nd most memorable was when we played our 1st show overseas in Denmark for KILL TOWN DEATH FEST. Another milestone for us, as we never thought we'd ever go as far as our hometown, let alone in Europe. Almost a magical show and time for us. Something else....

8.Are their any shows or tours planned in 2020 if yes where will the band be playing?Who are some some bands that you all will be sharing the stage with?
Yeah we're playing with the mighty AUTOPSY here in Chicago in March with PROFESSOR BLACK and the aforementioned MOLDER. This will rule fo' sho'. Do not miss this....

10.Who are your all-time favorite bands coming out of Illinois and are their any new bands you could recommend to the readers?
Shit this could be a whole book: MASTER/DEATHSTRIKE (anything Paul Speckman touches actually), SINDROME, IMPETIGO, DEVASTATION, MACABRE, ZOETROPE, TROUBLE, TERMINAL DEATH, MAIMED,CONTAGION, THE DEAD YOUTH, DEAD FETUS, CARDIAC ARREST, THRUST, ZNOWHITE, NOVEMBERS DOOM, USURPER, EYE GOUGER, DISINTER, SUPERCHRIST, MOLDER, ROTTED, DRENCHED, NUCLEUS, DYSPHORIA. There you go, past and present. There's probably a few obvious ones I missed, but my brain ain't what it used to be...

11.What does Underground Metal mean to you?
A big middle finger to the world and not giving a fuck. No room for gentle feelings. Once you start thinking like that it's done.

12.As mentioned you have been a part of the underground since the mid 80's so I was curious did you read a lot of fanzines back in the 80's amd 90's?What were some of your favorite fanzines that you read?
Too many to mention. Just find yourself some KICK-ASS Monthy issues from the 80's and read them cover to cover. And when you're done. Read 'em again...

13.Are their fanzines that you currently read these days?Do you read any of the current web-zines that are on-line these days?
I don't read magazines anymore. I prefer to watch television.

14.Besides fanzines I know tape-trading was huge back in the 80's and 90's did you ever do a lot of tape-trading in the early years?What were some of the first demo's you got and do you still have them?
I have a box of tapes rotting away in my garage or something. Still have most but they are probably all degraded by now. Trading Morbid Angel stuff was life changing. Master/Deathstrike demos, Hellhammer, Death, Sadus, Slaughter, Massacre all come to mind. Great times but they are gone now...

15.When you need to take a break from working on new music or band business what do you like doing in your free time?
A full time job pretty much sucks the life out of me on a daily basis, so as Bon Scott once sang, "Doing nothing means a lot to me..."

16.Thank you for taking the time to fill this interview out do you have any final comments for the readers?
Thanks for the interview and METAL NEVER BENDS!!!